In my opinion, the best novels are novels with unlikable, or flawed, characters. I said it before in my review of Donna Tartt’s The Secret History, and I’ll say it again now that I have read John Irving’s A Prayer for Owen Meany.

The narrator of the story is John Wheelwright, an unassuming, not exceptionally bright boy from a good New Hampshire family, who doesn’t know who his father is and regularly doubts his faith. He lives his life through that of his best friend, Owen Meany—never brave enough to follow in his footsteps or challenge his motives. He often calls Owen ‘Owen Meany’, much like Jesus is often referred to as ‘Jesus Christ.’ This kind of tricks you into thinking that Owen Meany is indeed a bit of a phenomenon—too special to be called by only his first name. 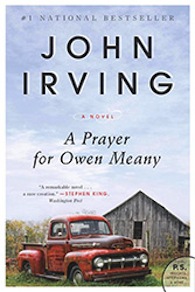 A Prayer for Owen Meany by John Irving

Owen Meany has it all figured out. I admire him for the way he deals with his lack of height, his odd VOICE and other physical shortcomings, but at the same time he annoys the hell out of me. Irving brings Owen Meany to life in such a way that he immediately gets under your skin. And it’s Owen Meany’s tenacity, courage and unfaltering faith that keep him there.

You can’t help but wonder why John isn’t more upset that his best friend killed his beloved, perfect mother on the baseball field. Owen Meany tries to convince John that it was predestined—that he was sent by God to accomplish certain things on Earth—and succeeds. John has no problem giving Owen Meany the benefit of the doubt, yet he furiously condemns Owen’s parents (John repeatedly describes Owen’s mother as ‘retarded’) for telling Owen certain highly improbably things about his birth that shape his life and the way he sees the world.

If you have never read an Irving novel before, I wouldn’t recommend you start with this one.
On the one hand, it contains Irving’s token sense of humor and some passages literally made me cry with laughter, such as the description of Uncle Alfred’s boating skills, and the event with Dr. Dolder’s VW Beetle.
On the other hand, the novel also launches into descriptions of Christianity and rants against American society (either through John, the narrator, or through Owen Meany’s CONTRIBUTIONS TO THE SCHOOL NEWSPAPER and his DIARY ENTRIES) that you may only accept if you feel you know the author’s style and previous characters and themes well.

Even though, in my opinion, Irving is spot-on in his analysis of the tragedy of the Vietnam war and the desensitizing effect of television (which “gives good disaster”), it’s a bit like listening to a good friend going off on a rant—you just nod and give them some time to vent, simply because you love them and accept that they cannot be perfect all the time.

That said, Irving’s use of foreshadowing is nothing but brilliant and it absolutely makes this novel. All along, I knew what was coming, but the setting and unfolding of events was so unexpected and disturbing that, for two or three days, I left the book on my nightstand with only a few pages to read because I dreaded the outcome so much.

I guess that, in the end, I cared much more for Owen Meany than I thought I did. If there were an Owen Meany in my life, I’d be a Christian too.